The Poet
Our show was at an outdoor amphitheater overlooking lake Garda. 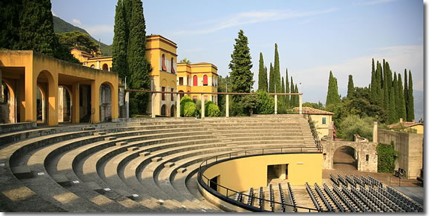 Source
It’s a beautiful location. It was built by the poet Gabriele D’Annunzio. It’s a whole complex, which includes his villa, his mausoleum…and much more. He dubbed it Il Vittoriale degli Italiani (“victory of the Italian people”), but others have referred to it as a fascist Luna Park. D’Annunzio was much more than a poet—he is also dubbed “the father of Italian fashion.” He lobbied for peace during WWI, and he was a well-known libertine. I’m going to see if I can deal with one facet of this guy at a time. 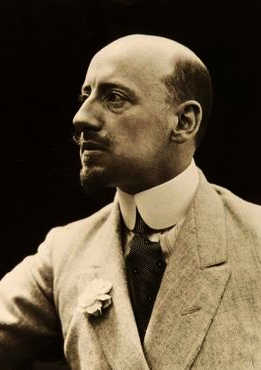 Source
One may ask, “How can a poet afford to build his own amphitheater—as well as this whole complex?” Well, the answer I got was that he was very popular—not just as a poet, playwright and novelist…and not just with the ladies. His charisma and wit seemed to draw all sorts of people into his orbit. He had supporters who funded some of his extravagant ventures, but in the end even that just wasn’t enough. He outpaced them all. Creating this complex on the shores of Lake Garda put him heavily into debt, so, as a way out, he cleverly “donated” the entire complex “to the Italian people” (hence the title) and had the government take care of his accumulated debts—as it was theirs now.
Despite being a philanderer and a scofflaw, he managed pretty well. One of his lovers, the famous (at the time) Italian actress Eleonora Duse, had been bankrolling him (he moved into the villa opposite hers near Florence), but after about ten years she had had enough of his philandering and stopped paying his bills. D’Annunzio, not able to pay the rent on the villa, escaped his debts by quickly going to France. It was there that he collaborated with Claude Debussy on The Martyrdom of Saint Sebastian, (a piece which is now mostly recorded without D’Annunzios contribution) which got him in hot water with the Vatican. They then banned ALL of his writing.
The amphitheater that we played at is modeled on a famous Greek one in Taormina, a town in what is now Sicily. Further up the hill from this amphitheater is a building that houses his airplane, which he had built in 1918 so he could fly over Vienna and drop leaflets asking everyone to stop fighting. (He also had a reputation as a war hero—hence the quasi-military outfits he sometimes sported.) It was the longest flight in Europe at the time. It must have been cold up there, and his flying suit, though very stylish, couldn’t have been warm—it was made of what looks like linen.

Off to the side of the plane building is the entire front of a ship protruding from the hillside. D’Annunzio took a fancy to this rotting ship he’d seen and had its remains hauled up the hill. It became a nautical-themed terrace for entertainments. It’s completely surreal—like Werner Herzog’s Fitzcarraldo—a boat on a mountain. 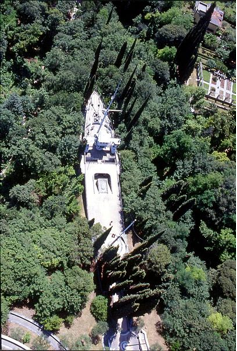 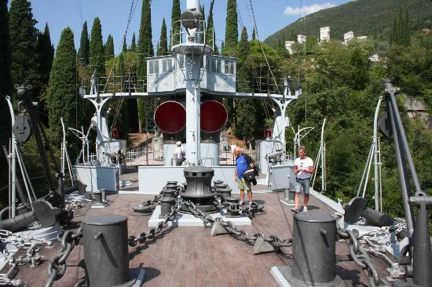 In another building is a small boat with torpedoes on it! He was amassing his own private navy and air force. 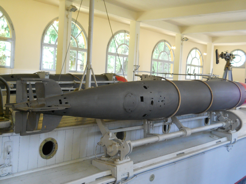 D’Annunzio designed his own clothes, some of which were very chic and fashionable, as well as outfits for his girlfriends. I suspect they paid for their own outfits— though he may have designed him.
Here is how a diplomat of the time (Harry Clément Ulrich Kessler) describes him:
His suit is also Italian: light gray summer pants such as one sees in bazaars in Florence, or Sunday on Italian traveling salesmen. Add to that rundown patent leather shoes, a somewhat frayed coat with a black-braided casual suit, and a no longer new, light lilac necktie, the whole outfit in the style of a fading coffeehouse Don Juan from an Italian small town, Bologna or Pisa. The bald scalp and the yellow, wrinkled face with the pale blond little beard completes the burned-out impression, standing in contrast, it must be said, to the clever, often witty, often cruelly indifferent eyes.
One might ask once more, “How does a poet afford this?” On display in a small museum under our dressing rooms was a portion of his shoe collection. Most are sort of variations on a theme—many white shoes with very slight variations and lots and lots of shoes with spats. Very petit, delicate feet he had too. He had special luggage cases made for his shoes—or for some of them at least. They are big cases, like huge stacked bento boxes or tiffin lunches, with a pair of shoes neatly nestled in green felt on each level. One pair of shoes had a penis and balls motif on the top—the symbol of a proud libertine. 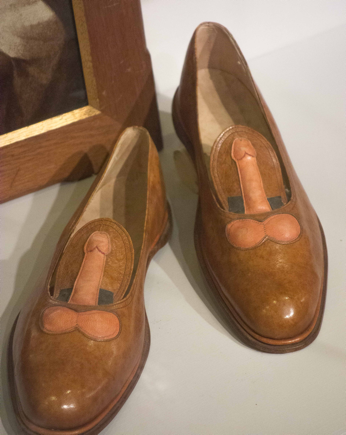 Next to these were some of his self-designed outfits. The first in the display was a nightshirt he designed with a shockingly large hole in front for his penis.

One has to ask, “Was this serious?” He couldn’t just lift up the nightshirt in order to go about his sexy business? And isn’t that hole a little…large? Maybe it was a way of advertising to the ladies what a serious libertine he was? It certainly got my attention and I dutifully included it here. As a seeker of attention, D’Annunzio’s plan seems to be still working.
He was quite serious about sexual and other freedoms—for example, Italy’s freedom to be independent—so much so that at one point he declared the city of Fiume (in what was then Slovenia) a free zone—an independent state. It was called The Italian Regency of Carnaro in Fiume, and he was to be the Duce (leader). They issued their own stamps with D’Annunzio on them and the motto: “Here we’ll live wonderfully” in Latin.

Source
Conveniently, it was a place where sex and drugs and any and all sorts of behavior were allowed. Music was one of the fundamental principals of the state—written into the constitution. Very modern and libertarian of him. Reminds one a little of The Sourcecommune (and many others) in California in the 70s. 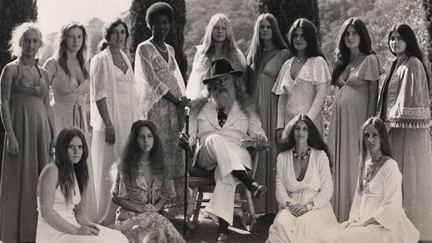 Source
The sexy utopia with the cult of the strong leader didn’t really take, however—it only lasted a year—but it did influence the young Mussolini. Much of the political stagecraft that Mussolini adopted for his brand of fascism originated with D’Annunzio: the Roman salute (we know it as the Nazi salute but it’s actually very old), speeches made from balconies, stage tricks, large public rituals, the adoption of religious symbolism and black-shirted followers. All in all, a pretty scary direction, but prescient in the use of politics as a form of theater, which of course it is. Tapping into the latent fervor of folks’ nationalistic pride and then theatricalizing it—wow, it’s a potent mix…and that brew got a lot of people very drunk in the 20th century. Theater can be scary.
Most Italians of the current generation know him as a dandy and a ladies man rather than as a poet. But how did he do it? What drew them to him?
The diplomat and writer Luciano Mangiafico wonders the same thing:
It is hard for us, nearly a century later, to fathom why women were so attracted to D’Annunzio. Photographs of him show that he was short of stature, totally bald by age 23, had spindly legs and rotten teeth, and his eyes were described by actress Sarah Bernhardt as “like little blobs of shit.” He was, in other words, unattractive; thus, it must have been his mind, melodramatics, wit, and daring (and, toward the end, [other peoples] money) that made women flock to him like moths to a flame. 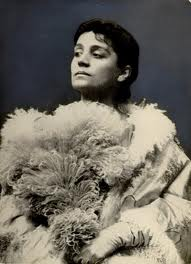 Source
Mangiafico continues:
Eleonora Duse was one of the two most famous European actresses of the era. When not touring, Duse lived in a modest villa, La Porziuncola, Via della Capponcina 75, in the hills above Florence. D’Annunzio had conveniently rented the more grandiose villa La Capponcina, for which he could not afford the rent and which Duse paid for him, at Via della Capponcina 32, living there in princely splendor with his 38 borzoi dogs, 10 horses, 15 servants, and 200 doves.
Wow, the rap star of his day—living way beyond his means. 38 dogs!! Women flocked to this little monster to such an extent that he built a house near his own villa here at lake Gardo as a kind of waiting room. If he was occupied with one woman, his next visitor would just have to wait in this smaller house (R. Kelly had a similar arrangement in the recording studio: multiple waiting rooms for girls.) Mothers flocked to him, and when they were done with their business they offered him their daughters.
Mangiafico also views him as ahead of his time—and not always in a good way:
He was exhibiting so many of the behavioral traits not openly admired until our present day: selfishness, self-centeredness, sexual promiscuity, ostentatiousness, love of violence, and a narcissistic dictatorial bent. A master of self-publicity, he aimed to shock and dazzle Europeans with his politics, conventional and unconventional sexual gymnastics, heroic and nearly impossible military feats, and his writing. His life was a contrast between sophisticated urban civility and a crude and violent behavior.
I think Mangiafico is right—I’m amazed that this philandering moocher, who thought the world owed him a living (and in high style to boot), is so revered. Revered for his poetry? I think not. I think he is revered because he lived out the egomaniacal, narcissistic and libertine life that many can only view from afar. Freuds’ id run rampant. We deny that we would choose to live like him if we could—or some of us do anyway—but there is obviously a huge fascination. I just saw a show in Rome by Italian contemporary artist Francesco Vezzoli, and he has a similar obsession for both celebrities and with himself…though in other regards I don’t know if D’Annunzio and Vezzoli are similar.
Other artists—Wagner comes to mind—were also in debt through much of their professional lives, sponged off women and were similarly adored and admired. Maybe D’Annunzio managed to convince everyone that his various projects were so worthy and important in both political and artistic ways that one could ignore his personal quirks, which may have only come out posthumously anyway. But no matter what the case—and though he might have managed for a time to spin it otherwise—it seems that ultimately he himself was the project. He may have pretended it was for peace or for the glory of the Italian people, but in the end it was all about me.
His legacy lives on- here is a poster for a play that is currently running in Milano. 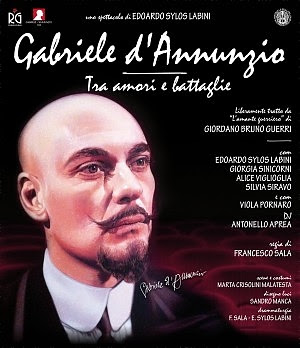